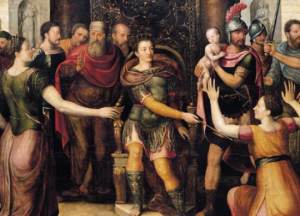 Most of us have heard the biblical tale of the infant claimed by two new mothers and the clever gambit King Solomon employed to ferret out the truth of the matter. This oft-told story from the first book of Kings forms the basis of the ages-old desire of aspiring leaders to possess and exercise the “Wisdom of Solomon”.  Among those familiar with the story, especially us leadership geeks, it is widely believed that the great secret of King Solomon’s success as a leader was the unparalleled wisdom gifted him by God. And like so many other widely-held beliefs, it is not entirely correct!

To comprehend the essence of Solomon’s spirit as a leader, one must dig deeper into the story.  Yes, as the story goes, God was pleased with Solomon’s stewardship of the nation and yes, He granted his request. But the source of Solomon’s authenticity was the core personal attribute from which his request emerged.  Simply put, it was his humility. When told he could request any favor, he answered as follows:  “…you have made me, your servant, King to succeed my father David; but I am a mere youth – not knowing at all how to act…give your servant therefore an ‘understanding heart’ to judge your people and distinguish between good and evil.”

“Knowing others is Wisdom; knowing yourself is Enlightenment.” – Lao Tzu

Though he was already clothed in boundless power and wealth, young Solomon had the self-awareness to look inside and recognize the deficiencies of his youth and inexperience. And even more remarkably, he had the humility to ask for help to overcome those deficiencies.  He took seriously his leadership obligation to serve his people with understanding and discernment; so seriously in fact, that he demonstrated an open and innocent vulnerability in that moment.

And for all you bottom-liners out there, here’s the kicker!

As the story continues to unfold we learn that God was so pleased with the selflessness of Solomon’s request that He went on and granted him unequaled riches and a long life, in addition to the initial gift of wisdom.  So the message ought to be clear for contemporary leaders:

“It is possible to do well by doing good. People, Purpose, Profit and Planet are not mutually exclusive business choices.” – BN

Wisdom is typically thought of within a context of competency, but an ‘Understanding Heart’ finds kindred company in the realm of Emotional or Spiritual Intelligence or Higher Self.  In order to evolve in genuine wisdom, aspiring leaders must seek first the path of self-awareness, humility, understanding, and service.  Sustainable profitability will surely follow.

Connect with: Bernie on Linkedin  Or join our Linkedin Discussion Group at: Altrupreneurs Creating Enthusiastic Engagement